The Memories and Musings of a Nudist

Here’s a conundrum. Imagine you take a long walk from where you are staying to visit a quiet beach. There is no one around, so you decide to take off your swimming costume. Caught up in the joy and freedom of the moment, you lose concentration, only to find that the tide has washed your costume away. You have no other clothing. What do you do?

Here’s another one. You have accepted work overseas in South Africa. En route, you stop over at the Seychelles, and the day before you are due to fly on to take up the new job, you take the opportunity to have a short skinny-dip and sun yourself on a small rocky outcrop 50 metres from the beach. A nun with the charge of school-children spots you from the shoreline, reports you to the authorities, and you end up on charges of lewd and indecent behaviour. What say you to the judge, who has the capacity to delay your departure to your new job? What do you say to your new employer about the potential delay?

These are just two of many amusing anecdotes described by Naturist author Richard Langdon Cook in his autobiographical work, I’ll Catch the Sun. Originally from the UK, Cook has worked extensively across the globe as a successful marketing executive, before finally retiring to Florida. Along the way, in such varying locations as Japan, Hawaii, Thailand, South Africa, France, the Carribean and New Zealand, Cook has experienced numerous facets of the Naturist world, placing him in a special position to comment on the Naturist lifestyle in general.

Cook’s style of writing is intelligent but easy-going. Most chapters are only a few pages in length, and each one represents a snap shot of a Naturist experience, or a social comment arising out of a specific situation. Some chapters do not refer to naturism at all.

What I found refreshing about this is that Cook takes us into his confidence and shares with us his ideas and feelings about various topics, presenting a more rounded sense of a Naturist who engages with life outside of just Naturism. Cook loves golf, food, wine and music. He loves learning about new cultures, and is open to new experiences. He tells us about all of these things, not only about the Naturism. In this way, we are about to form a more three dimensional sense of him as a person; he becomes more than merely an advocate of Naturism; he is someone with whom most people could identify in some way.

In and amongst the storytelling, Cook touches upon numerous topics that will resonate with all of us: the pleasure of cooking naked; that practicing Naturism can be as inexpensive as you want it to be and can be enjoyed at home, at a beach, on a boat, or at an exotic holiday destination; the pleasure of playing sports au naturel; the ludicrous rules that some more traditional nudist clubs impose; the question of whether we tell our work associates about our lifestyle; the lack of younger people in the movement; religion and how we understand our bodies; and the joys of family Naturism.

For those who want to learn about Naturism as practiced by different cultures, there is some helpful material here. For example, Cook describes in some detail the social rules around Japanese baths, where one must ensure complete cleanliness before entering the hot baths, and then hold a small towel discretely over one’s privates before entering the water. Without understanding these cultural expectations, it is easy to imagine how a Westerner might easily offend the locals at such a facility. Cook’s descriptions of Naturism in various countries would be useful to those contemplating the pursuit of outdoor nudist travel experiences. 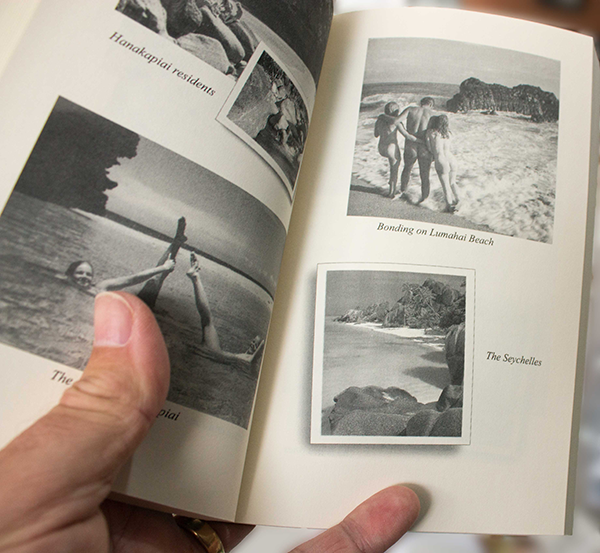 A distinctive feature of Cook’s style is that there is no sense of defensiveness or justification for his lifestyle. Cook does not argue from logic or reason, he does not cite religious or philosophical authority; he simply speaks as someone comfortable with his nudism, and who is happy to share about his life experiences, including those related to his Naturist journey.

By publishing this book, which includes not only his story but also tasteful photos of some of his Naturist adventures, Cook is shining example of the potential for each us to be open with those around us about our lifestyle. Sharing can only lead to greater understanding and social acceptance of Naturism.

One of the very best moments in this publication is the authentic text of a radio interview which Cook’s third wife Mary gave on the subject of Naturism. It is always refreshing to hear a female voice in Naturist publications – and in the context of this book it is wonderful to hear how the author’s wife has come to love their Naturist lifestyle. We infer through his writing that Cook’s first two wives were less accommodating of his Naturism. It is shame that Cook does not share more about this issue with us, as it may have helped the many Naturist men whose wives oppose or misunderstand their interest.

This book is not without shortcomings. It has a slightly random and “patchy” feeling, in that it jumps around at times without much sense of direction apart from having the stories grouped by regions of the world where Cook has travelled.

Most stories are told very simply, meaning that at times I felt frustrated by the lack of detail. I found it difficult to get totally immersed in the book as a result.

This book provides a very positive view of Naturism from an articulate, successful and sensible nudist. It is not at all confronting or proselytizing in tone – rather it is comfortable in itself.

Because of this, it would not be out of place as a Christmas or birthday gift for someone whom you thought might be open to read about Naturism, without the hard sell.

Contains 315 pages, with some black and white photos.