Art In The Nude Report

On the 9th April, a mild Saturday evening, in Newcastle two hours north of Sydney, a group of people lined up outside the Newcastle Regional Art Gallery in preparation for a private tour of the gallery. The tour was organised by the ROSCO Nudist Club and made possible by the Australian Naturist Federation (ANF) with some help from TAN magazine. The evening provided a rare opportunity to visit the gallery and have a guided tour while naked.

The idea behind the tour was to provide not only a unique experience for Naturists, but also to provide the opportunity through the resulting media exposure to spread the word about the existence of the ROSCO Club and the ANF, as well as providing the opportunity for members of the public who may have an interest in social nudity to participate in an organised event.

As an added incentive for those looking for “an excuse” to attend the event, it was advertised that profits from the evening would be donated to the McGrath Foundation’s mission to fund McGrath Breast Care Nurses in communities right across Australia and increase Breast Cancer awareness in young women. A total of $500 was collected via donations from the night. 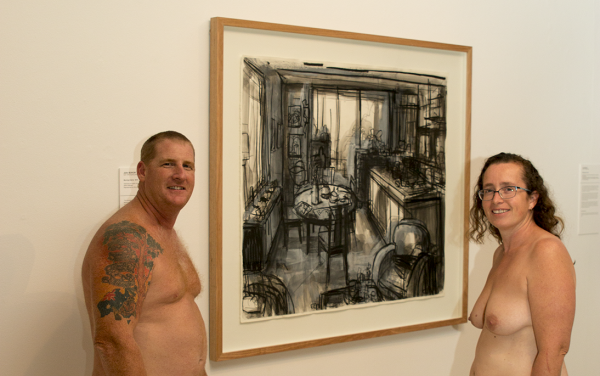 The event also saw the issue of media releases and a number of radio interviews and press coverage resulted. It is important to let people know that Naturism is a legitimate lifestyle and such mainstream media coverage is a great way to normalize clothes-free living in our society.

At the appointed time the doors were opened and the gallery staff directed those in attendance to a secure room where they could get undressed.

The evening commenced with David from ROSCO officially welcoming the 100+ people in attendance and introducing the gallery staff and volunteers who would be assisting with the evening, as well as the three artists who would be taking groups around and speaking about some of the art installations. 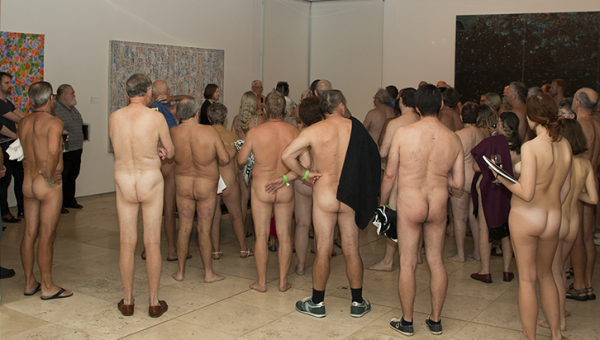 The groups were buzzing as we visited the different artworks and heard the stories of the pieces. The gallery staff and artists were very quickly comfortable with all the naked bodies and appreciated the questions and interest shown by the groups as they made their way through the exhibits.

After the tours there was plenty of time to catch up with friends or make new ones over a glass of wine and canapés.

There were a number of younger people in attendance and when asked why they had decided to come along one group said that they had seen the notice of the event on social media and some of the tasteless remarks made in some of the comments. They thought that those narrow minded people would not be at the event and decided to come and experience it for themselves.

Judging by the proportion of people that were new to this type of event and a nude social experience generally, the night was a success for them as well as an enjoyable night for the more seasoned Naturists.

Reaching out to the wider community by events such as these and starting to break down the metaphorical “self made 10 metre walls” that we have built around our clubs and lifestyle, this is a great way to proceed and get the acceptance we need in the wider community.

Congratulations to the organizing committee and the supporters of this event.

As reported in TAN Issue 71.